When Traveling was a Nudist Compromise

Posted on June 26, 2013 by OmnivorousTraveler

The random selections of stuff at flea markets can be great vehicles for time travel. You never know where and when they might want to take you. Thanks to an eighty-year-old magazine I picked up last weekend at the LIC Flea, I was able to time-travel into the past of—well, travel. The December 1933 issue of The American Traveler, an oversized magazine filled with destination articles, narratives, and cruise ship schedules, offers a curious snapshot of the state of travel—and travel writing—in the early 1930s, a time when Havana was still America’s backyard party port.

As the brittle pages crumbled with each flip and the cover fell away from the rusty staples, I noticed that on the editorial side, a division of writing roles broke on the gender line. The men wrote the destination articles and the narratives, while a lone woman, Helen Josephy, wrote the fashion pieces: what famous women wear while traveling, and what you should wear too. In case you’re wondering, ladies, spiffy Tyrolean shorts are the go-to thing for the 1933-1934 season for lounging around on cruise ship decks.

And for those going to Miami or equatorial resorts, Josephy wrote of the availability of “separate little tops knitted on brassier lines”—which would soon become half of the modern bikini. The term bikini would not be applied to such an outfit for another 13 years, but Josephy shrewdly refers to the items, which must have been quite provocative for the time, as “nudist compromises.”

Josephy often deviated from her sartorial quips by including the ladies’ travel tales and reflections. Mary Pickford, the Canadian-born silent film star, whom Josephy describes as “the most traveled of all the Hollywood stars,” considered Benito Mussolini, fascist Italian dictator and patron saint of on-time trains, the most thrilling personality she had ever met. In the words of Pickford, it was because “of his flair for fun and his sense of humor which never shows on parade.” I wonder if Pickford also enjoyed the fun, humorous side of the Italian people who hung Mussolini upside-down a little over a decade later.

And then there’s the aw-shucks travel mishap of Lucrezia Bori, Spanish opera singer, whose “high point of her shopping adventures was the purchase of a little Negro boy for ten dollars.” Bori was visiting “one of those spicy little islands in the West Indies” in 1912, where boatloads of locals rowed to her ship to sell tropical birds and fruits to the passengers. But Bori figured she could top all her travel-trinket-collecting buddies by purchasing a human being, as she was “thinking what a sensation she would create with a black serving boy when she got back to Valencia.” But as the ship started to leave the port, the boy leaped off the ship and swam to his father, who was ten dollars richer. Dang, Ms. Bori, you got punked!

Besides the absence of any moral commentary on the episode, such an inclusion in the piece is revealing of the era in another sense: how travel scams keep evolving and adapting. I mean, I doubt the buy-a-Negro-boy scam would find many victims today, while back then, the drugged-candy-bar-from-a-stranger scam hadn’t been invented yet. The larger take-away here is that as long as there is travel, there will be travel scams.

And how about the offerings from the gents? I must say that their pieces have changed the least from their modern counterparts. Take this lead paragraph from a piece titled “A Railway that Never Grew Up,” by Ben S. Laitin, about a train ride in Bermuda:

“ ‘TOOT-TOOT!’ The silly little whistle made us all laugh, but it also endeared the Railway to us before it came—and we were more delighted than ever. A full-sized, standard gauge railway car—but that piping little whistle! And those small wheels! And the lemon-yellow color! Standard gauge or not, this was a toy train on a railroad that never grew up.”

The overuse of the exclamation point has apparently not died with the buy-a-Negro-boy scam, because many travel destination pieces of today are still crawling with them. Exclamation points, that is. I must admit that looking past the punctuation quirks, the opener was decent enough to make me read further. But the rest of the piece continued with mentions of “fascinating marine worlds,” “breath-taking stalagmites,” and the “magnificent Castle Harbour Hotel,” glowing phrases that would not be out of place in your modern, never-critical destination travel piece (If I were alive in the 1930s, I doubt The American Traveler would have answered my story pitches).

What would a travel magazine be without a food article? Carleton Beals’ “Mexico a la Carte” takes us to his favorite restaurants of Mexico City, where he educates the reader with definitions of Mexican specialties that may have been exotic to Americans in the 1930s: the taco and the enchilada. He also includes mention of the labor-intensive methods for making mole sauce, and he explains the difference in regional specialties that are available in the capital city, such as Oaxacan tamales (wrapped in banana leaves instead of corn husks). In what seems to demonstrate a forward-looking eye toward acknowledging diversity, he tells the reader where to find German and Syrian food in the streets of Mexico City. He even fills us in on the capital’s cocktail bar scene. At one joint with chic little booths, “ladies must go accompanied.”

Roughly half of the magazine consisted of listings of the aforementioned cruise ship itineraries and schedules. Based on its frequency in itineraries, the Panama Canal was just as popular as it is now. While some quickie, five-day cruises to Bermuda were advertised, many were much longer. I was left wondering what American employer would have allowed their workers to go on a 43-day European/Middle Eastern cruise. Of course, roughly two weeks of that time would be spent crossing the Atlantic and back. 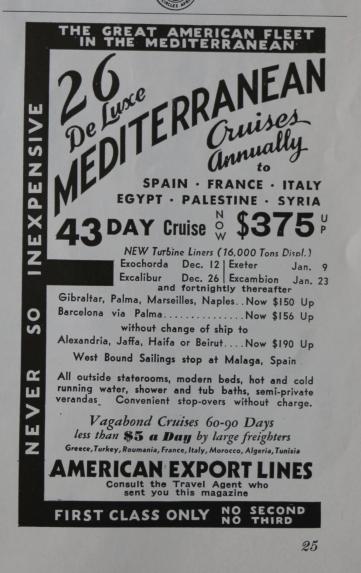 Starting to breathe down the cruise ship’s necks, however, was the commercial aviation industry, promising much faster travel times. Yet there was only one advertisement for the now-defunct Pan American Airways (“How much of your West Indian cruise will you spend in the West Indies?” went their ad’s title), and no prices were listed. But we know how this story ends.

And there were other eighty-year-old flavors that kept poking out. There was an absence of zip codes. The word gay had not yet acquired its current meaning of sexual orientation, although the word was used with such frequency in the magazine that I suspect it used to be a travel cliché, in any case an appropriate choice for a style of writing that never went dark or off-color.

I wonder how travel writing will read in eighty years. Will the Panama Canal still make the top-10 lists? Will there still be top-10 lists? Will villages still be “perched on hillsides”? Will we still be let in on “best-kept secrets”? And what would we think of futuristic travel writing? Just how does one describe the Martian sunrise anyway? Please, please let it not be a “must-see.”

Darrin DuFord is a travel writer, mapgazer, and jungle rodent connoisseur. His writing has won numerous awards and has appeared in The San Francisco Chronicle, BBC Travel, Gastronomica, Roads & Kingdoms, Narratively, and Perceptive Travel, among other publications. He is the author of Breakfast for Alligators: Quests, Showdowns and Revelations in the Americas (released in July 2016) and Is There a Hole in the Boat? Tales of Travel in Panama without a Car, silver medalist in the 2007 Lowell Thomas Travel Journalism Awards.
View all posts by OmnivorousTraveler →
This entry was posted in Travel Writing and tagged bikini, cruise, fashion, magazine, Mussolini, panama, panama canal, travel, travel writing. Bookmark the permalink.