Posted on March 27, 2014 by OmnivorousTraveler 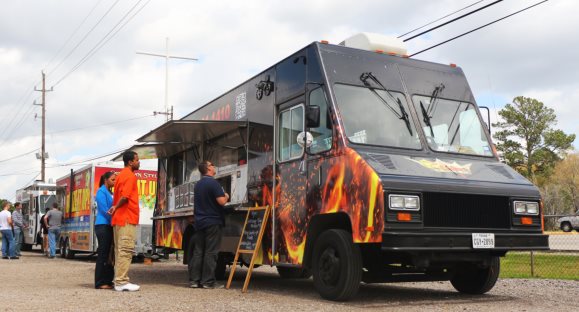 Food trucks tend to thrive almost exclusively in urban areas with ample foot traffic, a fact that has been true since before food trucks became trendy.

But in Houston, a city built around the isolation of the automobile and the demonization of pedestrians, street food vendors have made a curious adaptation. What does a vendor do when food trucks are banned from downtown, and the outskirts of the city consist of an ever-expanding grid of big, flat, square lots—every third or fourth containing a “for rent” sign, as if any clustering of buildings is illegal—discouraging all but the most hardy of pedestrians?

On a recent trip along Highway 6 South with my wife and father-in-law, I found that one of those empty lots had been converted into a food truck park. Five food trucks had parked around a central picnic area of weathered spool tables with umbrellas. There was no street and no sidewalk, just the constant whooshing of traffic on highway 6. Can we still call it street food? Park food, perhaps?

The organizers call it My Food Park HTX, and it has been open since October, 2013. It is one of Houston’s three food truck parks (could there be a food park scene brewing?). Before I get to the descriptions of the street food—make that park food—that we sampled, I should point out a few other differences between the food-truck experience in the lot and that of a good ol’ food truck parked on the curb of your favorite walkable city. While picking up food from trucks in the latter realm, you are pretty much on your own when it comes to how and when you eat your purchase. Standing and eating while it drips down your arm? Walking and eating while it drips down your arm? Walking with the bag closed until you find somewhere to eat it, all while the bag drips and the food becomes cold and soggy? There’s no support after the sale. But due to the placement of the truck in a compressed urban environment, there may not be much else that the vendor can offer you, unless the truck has permission to put out a few stools.

Now let’s see what a three-acre lot of can offer the street food fan. Besides the aforementioned tables with umbrellas, a few port-o-potties had been installed in the back of the lot. There were even a few communal bottles of sunscreen and bug spray that stood on an outdoor shelf for the comfort of patrons.

The most noticeable difference: we had to reach the food truck park by car, because arriving by foot would have required hours for each direction (not to mention the lack of sidewalks). But hey, at least patrons can flip out their drink holders while they eat in their parked cars if all the tables are taken.

When I met Jessica, the organizer who also runs a cupcake and beverage truck, she mentioned that the trucks come and go throughout the day, so the selection of food is constantly changing. When we were there, we began with a fried avocado taco with cilantro slaw from H-Town Streats. The avocado slice survived the deep frying without becoming mushy, and the flax seeds in the breading provided a pleasantly bold crunch.

Between the rattle of truck generators and the dirge-like slog of Led Zeppelin’s “Cashmere” shooting from the park’s speakers, I barely heard my name called from the Reigns truck, informing me that my swamp thing was ready.

The swamp thing is a burger made from a mixture of local alligator and boar meat, and then topped with a crawfish etouffee. The girl from the truck told me to attack the monstrous burger in two phases, one with knife and fork, and another with my hands. I sort of improvised and found that the burger was remarkably tender and the etouffee was sloppy and rich. I could not see how a diner could reckon with the swamp thing while standing up and walking, and thankfully, I did not have to find out.

Reign’s grilled elote, or corn on the cob, had already been cut off the cob, making it easier to eat than the usual street food elote. The charring and the cotija cheese added desirable flavor notes, but we found that the heat of the hot sauce and spicy lime aioli overpowered the corn. 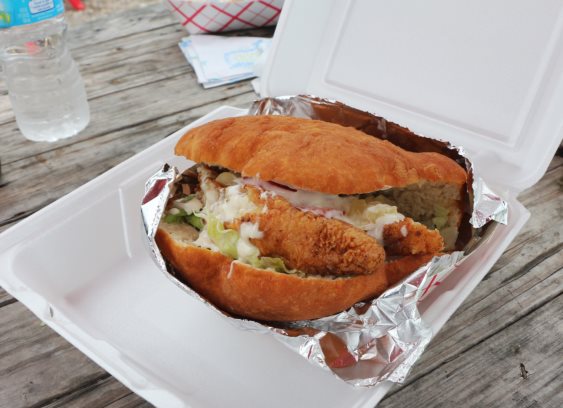 The bake & shark from Blaze It Up approached the size of a slightly deflated volleyball, a bit larger than the ones I remember from Maracas Bay, Trinidad. A two-person job, unless you haven’t eaten all day. But the guys in the truck assured me their shark & bake was a “fusion” take on the Trini classic. In place of chadon beni and tamarind sauces, they employed a dollop of pineapple chunks and a cilantro cream sauce atop their fried shark. The bake, or bread in Trinidadian terminology, was fried to order (that’s the one and only correct way to make it), and offered a light sweetness. That’s right, the bake was fried. It’s a Trini thing.

Just as the street food was park food. A Houston thing.

Darrin DuFord is a travel writer, mapgazer, and jungle rodent connoisseur. His writing has won numerous awards and has appeared in The San Francisco Chronicle, BBC Travel, Gastronomica, Roads & Kingdoms, Narratively, and Perceptive Travel, among other publications. He is the author of Breakfast for Alligators: Quests, Showdowns and Revelations in the Americas (released in July 2016) and Is There a Hole in the Boat? Tales of Travel in Panama without a Car, silver medalist in the 2007 Lowell Thomas Travel Journalism Awards.
View all posts by OmnivorousTraveler →
This entry was posted in street food, Texas and tagged Car country, cuisine, food truck, Houston, street food. Bookmark the permalink.