A Quiet Scene of Street Art in Astoria

Posted on December 5, 2014 by OmnivorousTraveler

Queens is kind of an unknown quantity for many people, even for those who live in other boroughs of New York City. And when visitors to Queens finally discover the charm of the borough, such as its unparalleled culinary diversity, they usually end up walking away with another unavoidable impression: its ugly buildings. A friend of mine even runs a blog devoted to Astoria’s homely architectural specimens.

Recently, something has begun to stir in this terrain of utilitarian construction. For the past year, on a block of 38th Street, free of attractions and heavy foot traffic, a pocket of street art has begun dressing up those nondescript postwar walls. The efficient flatness of the buildings and the monotony of closed metal grates have become large canvases, free of Victorian turrets and detailed, molded façades that would have limited the usable space. I will share the fruits of this pocket below. But first, is ‘pocket’ the correct zoological term for a cluster of street art? Should it be a gaggle? Herd? Clash? Congregation?

I think I’ll go with scene. 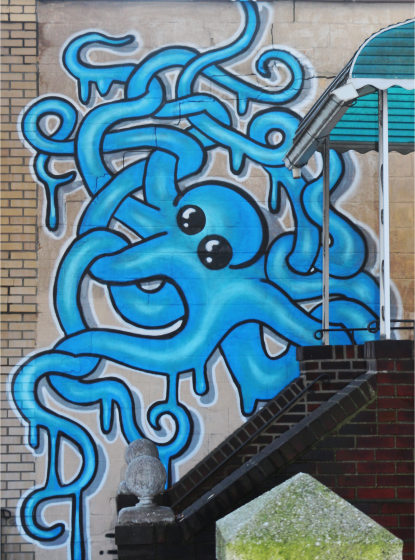 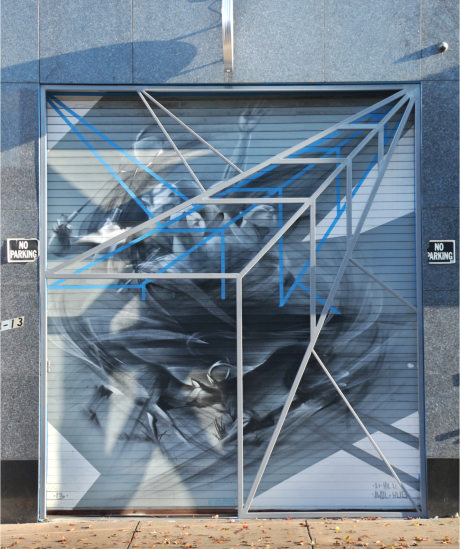 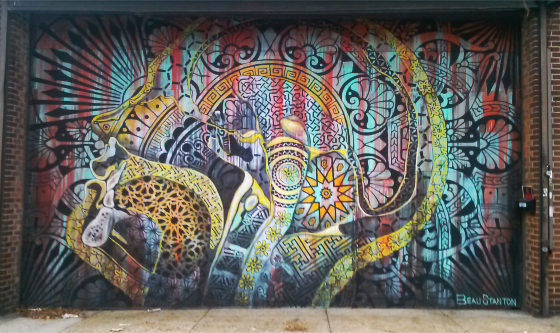 Darrin DuFord is a travel writer, mapgazer, and jungle rodent connoisseur. His writing has won numerous awards and has appeared in The San Francisco Chronicle, BBC Travel, Gastronomica, Roads & Kingdoms, Narratively, and Perceptive Travel, among other publications. He is the author of Breakfast for Alligators: Quests, Showdowns and Revelations in the Americas (released in July 2016) and Is There a Hole in the Boat? Tales of Travel in Panama without a Car, silver medalist in the 2007 Lowell Thomas Travel Journalism Awards.
View all posts by OmnivorousTraveler →
This entry was posted in Astoria and tagged Queens, street art. Bookmark the permalink.

1 Response to A Quiet Scene of Street Art in Astoria