Of Monsters and Men: of SWAT teams and aliens

Posted on May 10, 2015 by OmnivorousTraveler 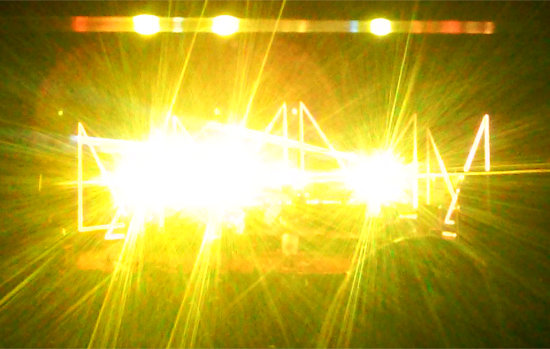 Succumbing to a wall of sound is an expected outcome at a live concert. But almost getting blinded by lights?

Of course, lights abound at concerts. Thousands of watts worth. But at the Hammerstein Ballroom last Thursday evening, the thousands of watts of brightness accompanying the Icelandic group Of Monsters and Men seemed to demonstrate a novel idea of function. Confronted with a row of five unapologetically bright floodlights stacked above a few square strobes, all planted behind the band and aimed toward the crowd instead of originating from the ceiling and aimed at the band, I felt like I should have either put my hands high in the air while waiting to be read the Miranda rights, or prepared to be beamed aboard an alien spacecraft. As it turned out, either scenario would have been more interesting than watching one and a half hours of light.

The pic above, admittedly not best quality as it was shot with a camera on a smartphone (no regular cameras were allowed), is pretty much what faced the crowd for the entirety of the show, give or take a switch from white to yellow light, excepting a few brief instances here and there when the entire stage went dark. Why did the band, known for delivering uplifting melodies, choose to create such an apparently obnoxious atmosphere? Perhaps they were assisting the venue in foiling any photo attempts via the power of the infamously difficult backlit scene.

Or, the band wanted to observe the faces in crowd, to take in reactions. To turn the ballroom into a posture-based focus group that would reveal the response to their new songs.

Or they may have been showing us how they indulge their hometown crowds back home in Iceland by overcompensating for the country’s long, dark winter.

In any case, what I do know is that stealing glimpses of the silhouettes on the generously large stage at the Hammerstein was about as exciting as watching a couple houseplants on a windowsill…at night, during a visit by a SWAT team that forgot what it was supposed to do.

When I attend a concert, I yearn for a dimension not found on a recording: the visual manifestation of the band’s emotional energy, capturing the moment, stamping the experience with a sense of place and time: anything from subtle tics and fidgets betraying passion to band members feeding off each other, and feeding off the crowd, adapting to the instant, creating a connection between band and audience.

Of Monsters and Men is not known for their stage show, but there could have been all kinds of magic moments swirling in and out of their performance. I’ll never know, because I couldn’t see much of it. We got little more than a smock-like outline of singer Nanna Bryndís Hilmarsdóttir and a lock of the drummer’s hair flying about like a shadow puppet in a breeze. And glowing blue spots dancing in our eyes afterward.

All this is unfortunate, not just because I felt I missed out on the liveliest part of the live show, but also because I enjoy the music of Of Monsters and Men. Their flavor of indie-folk carves out a modern enough style to appear in The Hunger Games and the Walking Dead, yet simultaneously puts forth a timeless sound that could have comfortably found itself on a bill with Siouxsie and the Banshees in the mid-1980s. In their dreamy and enchanting offerings, throughout the yin-yang, tag-team lead vocals of Bryndís Hilmarsdóttir and guitarist Ragnar Þórhallsson, the band is always aware of space and dynamics as they deliver melodies you can hang on to.

Silhouettes of introverted stage poses notwithstanding, plenty of concertgoers were bouncing in their seats and singing along, and even in the aisles, especially during “Little talks,” their last encore (and, incidentally, the only song during which the stage crew shut down the SWAT team/alien spacecraft high beams). Which just goes to show that merely being in the same building as Of Monsters in Men as they perform is enough for many of their followers.

If you still desire the full live experience of Of Monsters and Men, however, there is an easy solution: you should see them in the daytime.

Darrin DuFord is a travel writer, mapgazer, and jungle rodent connoisseur. His writing has won numerous awards and has appeared in The San Francisco Chronicle, BBC Travel, Gastronomica, Roads & Kingdoms, Narratively, and Perceptive Travel, among other publications. He is the author of Breakfast for Alligators: Quests, Showdowns and Revelations in the Americas (released in July 2016) and Is There a Hole in the Boat? Tales of Travel in Panama without a Car, silver medalist in the 2007 Lowell Thomas Travel Journalism Awards.
View all posts by OmnivorousTraveler →
This entry was posted in Music Review, New York City and tagged floodlight, Hammerstein Ballroom, Icelandic, music, Of Monsters and Men, performance, spotlight. Bookmark the permalink.