The Marshmallow: a Mindshare Indicator

Posted on September 26, 2015 by OmnivorousTraveler

I could not attend the Pope’s historic mass at Madison Square Garden yesterday. So I did the next best thing: I ate a Popemallow, of course.

I doubt corn syrup will absolve me of my sins. And edible ink on a vanilla marshmallow might be an unconventional way to pay homage to the spiritual leader of over a billion people. But this is the same leader who has dared, unconventionally, to voice his opinion on issues such as climate change. The Popemallow is an uncannily appropriate tribute. 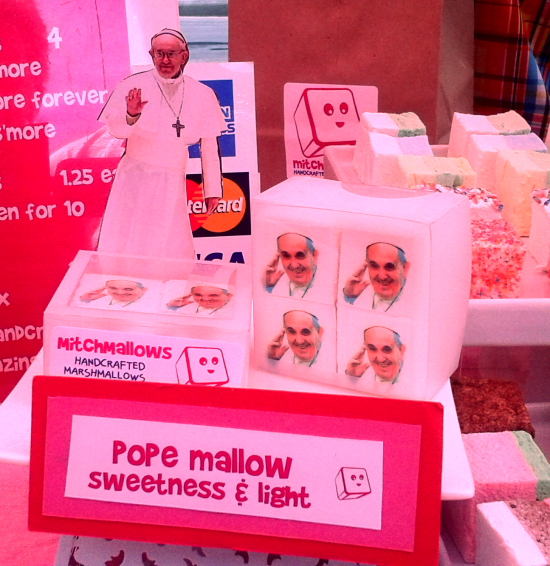 But at the same time, this sweet, squeezable confection from NYC-based Mitchmallows (creator of such marshmallow flavors as sweet potato vanilla, churros, and thanksgiving gravy) is a far cry from blasphemy, even when considering that the company’s webpage states that the owner is a “proud graduate of Ringling Brothers Barnum & Bailey Circus Clown College.” In fact, I find the opposite true. Along with the host of Pope bobbleheads and Pope dolls (one of which the Pope himself enjoyed seeing when introduced to one a couple days ago) that have been hawked anywhere within twenty blocks of Madison Square Garden, the Popemallow indicates the unprecedented reach of a Pope’s appeal.

If your picture is on a marshmallow, you’re going places.

Darrin DuFord is a travel writer, mapgazer, and jungle rodent connoisseur. His writing has won numerous awards and has appeared in The San Francisco Chronicle, BBC Travel, Gastronomica, Roads & Kingdoms, Narratively, and Perceptive Travel, among other publications. He is the author of Breakfast for Alligators: Quests, Showdowns and Revelations in the Americas (released in July 2016) and Is There a Hole in the Boat? Tales of Travel in Panama without a Car, silver medalist in the 2007 Lowell Thomas Travel Journalism Awards.
View all posts by OmnivorousTraveler →
This entry was posted in New York City and tagged confection, marshmallow, Pope, popularity, vanilla. Bookmark the permalink.