Intangible and Cultural: a Find from my Old Stomping Grounds

Posted on March 13, 2017 by OmnivorousTraveler

Over three decades ago, my search for Chinese, Japanese, or other Asian groceries in southwestern Connecticut would usually start and end in the yard-wide “Ethnic foods” shelf at Stop & Shop, where one could find little more than oversalted La Choy and Chun King products (I still remember the alluringly crunchy texture of the fried noodles from a can). 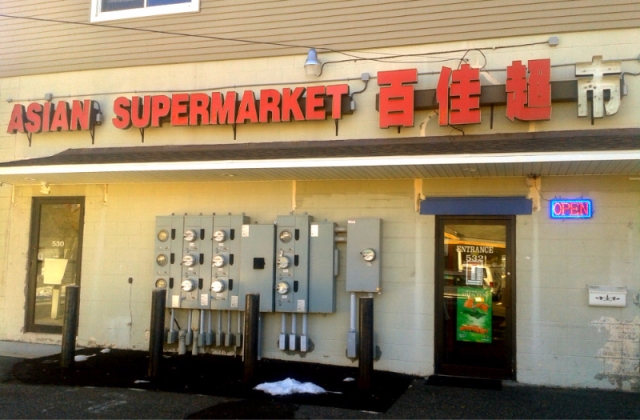 Such a time seems quaint when walking into the unassuming, boxy establishment simply marked as “Asian Supermarket” on the Boston Post Road in Milford. An aisle of frozen dumplings, a half dozen brands of Filipino stew seasoning packets, stacks of plastic soup spoons, and a jar of dried seahorses ($5 each) near the checkout counter lie among the crowded jam of goods. And not a can of metallic-tasting chop suey vegetables in sight.

So what sets apart one product from another in such a visual cacophony? Packaging, of course. Sometimes, a simple slogan or quote will do it, as was the case with the packet of Liuzhou River Snails Rice Noodle, whose bright yellow bag enticed me with “(A bite of China) Guangxi intangible cultural heritage.” I have a chance to taste the intangible? The cultural? Possibly some UNESCO-recognized heritage seeped in terroir? I was already considering making a purchase, but what finally won me over was the handwritten sign nearby stating that the soup packages were on sale for $4.25 apiece (save $1.25 — smart shopping!) because they were close to their expiration date. 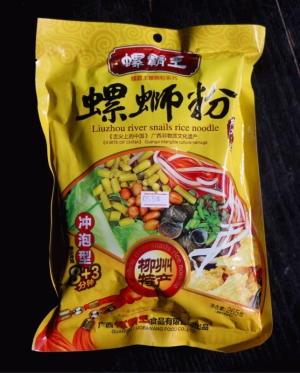 Thanks to all the ingredients having been vacuum-sealed into separate pouches, I figured I would be lunching on this southern Chinese specialty without spending much more preparation time than if had heated up a bowl of ramen. Would the snails remind me of the snail appetizers I washed down with beer in Cambodia, or would these little mollusks resemble the portabella-like meatiness of escargot?

The easy 1-2-3 steps would probably have been easy to follow had I been able to read Chinese, for unlike the quote that snagged me in the Asian Supermarket, the instructions had no English translation. We seem to share the same punctuation characters; I noticed a string of commas separating steps. Something like reduce heat, simmer, add noodle packet? The last instruction ended with an exclamation point. Was that a warning I should be concerned about? Don’t add the snails until the noodles are soft or you will overcook the snails and you will disgrace the heritage of Guangxi! Insure the rare, culturally significant vegetables grown only in our province are fully cooked or you will poison yourself! Or maybe it was just “Enjoy the soup!” 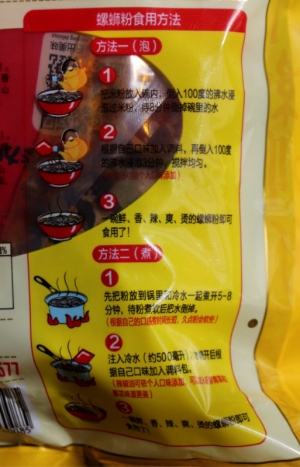 Upon opening the package, I was hit with an insistent scent that seemed as clinical as it did culinary, the scent of something being preserved, falling between dried squid and high school biology lab. But this was no time to allow a questionable smell to derail the mission; after all, there are stinky cheese connoisseurs out there who claim that once you get past the stench of unwiped ass, tasty bliss awaits.

I laid out the pouches to see what I was up against. It was an edible Ikea product without instructions. Here are the seven elements, and my attempts at identifying them: 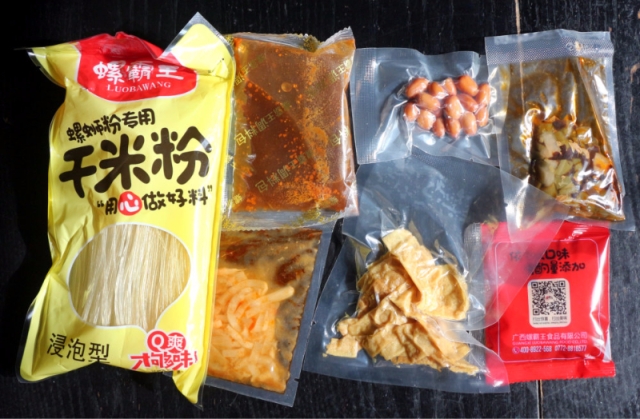 Far left: rice noodles. That was the easy one. The other six, starting clockwise with the upper left hand pouch: a flavoring packet, somewhat sweet, containing little chunks of congealed fat; peanuts; string beans, green onions, and black strips of what could be snail meat; chili oil; fried strips of something—tripe? Wonton wrappers? Unknown at this time; radish-like vegetables.

In case you encounter your own packet of Liuzhou River Snails Rice Noodle and would like to know how I managed to prepare it, here is how I did it: I softened up the noodles in water and added them to boiling water, waited for the water to come to a boil again, added all the pouches to the pot, and simmered for a few minutes. That’s it. What I ended up with was a bright, fiery soup that could have been the latest composite picture of one of Saturn’s moons, complete with rectangular patches indicating artifacts of photo-stitching. 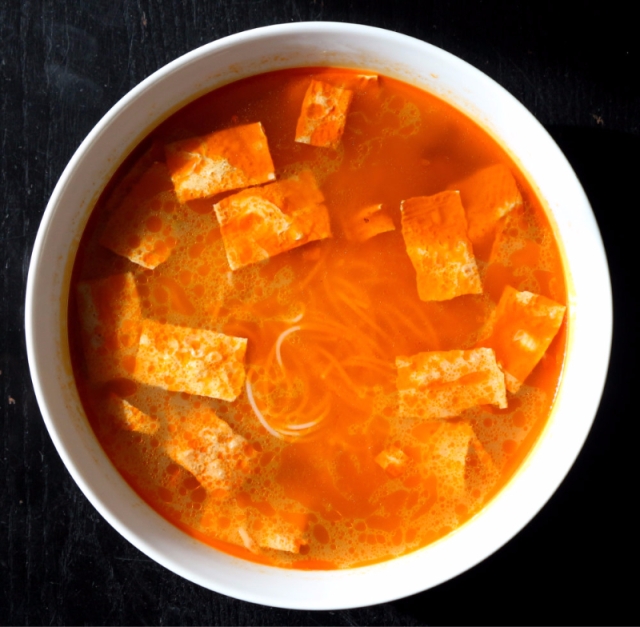 Due to process of elimination, the little black strips were most likely chopped river snails, and if so, the tiny portion seemed a little skimpy. But hey, I didn’t pay full price for the package, so it’s all good. In any case, the sharp heat from the chili oil overpowered almost everything else—the fried rectangles, the noodles, the sweetness I had detected in the flavor pouch. The snails were reduced to a texture, not a flavor. Only the green beans, which smelled surprisingly fresh for having been vacuum packed and shipped over in a months-long container ship—and had been approaching their expiration date—still retained some beaniness.

Would I try the soup again? Had I prepared it incorrectly, and I should give it another go? I’m afraid that won’t be possible. My wife forbade me from bringing Liuzhou River Snails Rice Noodle into our home again, owing to its smell that wouldn’t leave the apartment for a whole day—the vague scent of something being preserved. Preserved culture, perhaps.

Darrin DuFord is a travel writer, mapgazer, and jungle rodent connoisseur. His writing has won numerous awards and has appeared in The San Francisco Chronicle, BBC Travel, Gastronomica, Roads & Kingdoms, Narratively, and Perceptive Travel, among other publications. He is the author of Breakfast for Alligators: Quests, Showdowns and Revelations in the Americas (released in July 2016) and Is There a Hole in the Boat? Tales of Travel in Panama without a Car, silver medalist in the 2007 Lowell Thomas Travel Journalism Awards.
View all posts by OmnivorousTraveler →
This entry was posted in Connecticut, Uncategorized and tagged Chinese, Chun King, Guangxi, Liuzhou, Milford, rice noodle, snails, soup. Bookmark the permalink.