Posted on April 19, 2017 by OmnivorousTraveler 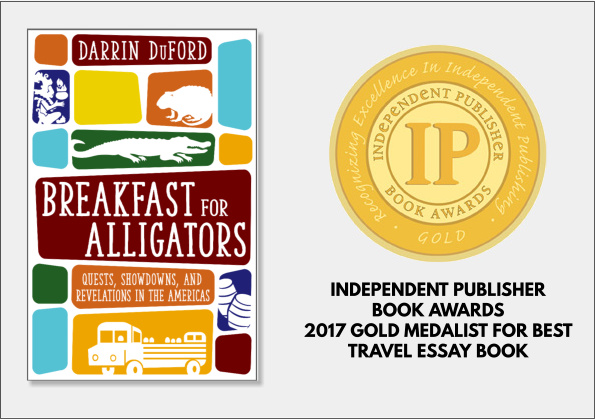 I’m thrilled that Breakfast for Alligators won a gold medal in the 2017 Independent Publisher Book Awards (travel essay category)! The thirty-two pieces in the collection resulted from distilling seven years of experiences around the Western Hemisphere, so not only am I humbled to see seven years’ worth of my work recognized in a high-profile fashion, but also such recognition validates this storyteller’s ability to offer tales that resonate with readers. If I can help put a place or an idea in perspective in a reader’s mind–and give them a few laughs along the way–then we both win.

This award also highlights the relevance and importance of deep travel stories in this era of populist politicians encouraging xenophobia and peddling alternate facts. Mark Twain said it best: “Travel is fatal to prejudice, bigotry, and narrow-mindedness, and many of our people need it sorely on these accounts. Broad, wholesome, charitable views of men and things cannot be acquired by vegetating in one little corner of the earth all one’s lifetime.”

Breakfast for Alligators is also a finalist in the 2016 Foreword INDIES Book of the Year Awards (winners will be announced in at the 2017 American Library Association Conference in Chicago on June 24) and was an honorable mention in the Reader Views 2016-2017 Literary Awards.

Darrin DuFord is a travel writer, mapgazer, and jungle rodent connoisseur. His writing has won numerous awards and has appeared in The San Francisco Chronicle, BBC Travel, Gastronomica, Roads & Kingdoms, Narratively, and Perceptive Travel, among other publications. He is the author of Breakfast for Alligators: Quests, Showdowns and Revelations in the Americas (released in July 2016) and Is There a Hole in the Boat? Tales of Travel in Panama without a Car, silver medalist in the 2007 Lowell Thomas Travel Journalism Awards.
View all posts by OmnivorousTraveler →
This entry was posted in Awards, books, Travel Writing and tagged award, Breakfast for Alligators, gold medal. Bookmark the permalink.