Fake Me Out, Please

Posted on April 29, 2019 by OmnivorousTraveler 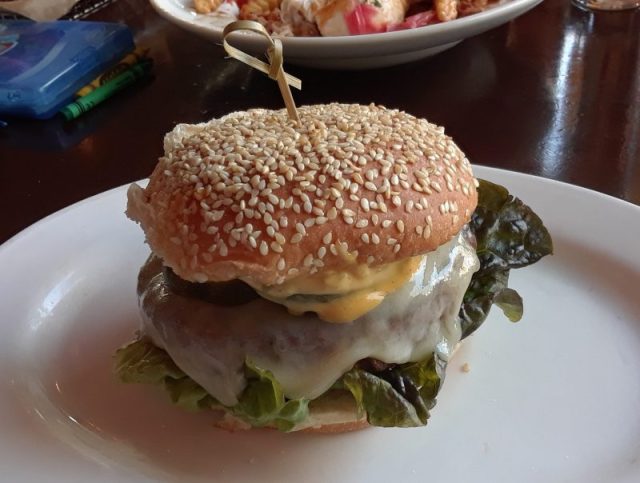 Fake meat has come a long way. And the curiously bleeding fake beef from Impossible Foods has taken a lead in this revolution, graduating from placement at a few tester restaurants here and there to nationwide availability at Burger King, arriving later this year.

Over the weekend, I tried 5 Napkin Burger’s version of the Impossible Burger, with lettuce, tomato, pickles, swiss cheese, and their mustard aioli (a.k.a. “burger sauce”). The patty arrived surprisingly charred like beef, an upgrade from my last encounter with Impossible beef a few years back, where the charring more closely resembled that of the outer crust of falafel. Unfortunately, the burger was well done — I had forgotten to ask for it to be cooked to medium. Then again, having the option to request doneness for a fake beef burger indicates what fake meat has achieved.

But my mistake had uncovered another similarity between Impossible meat and real beef: they both lose their precious juice and become disappointingly dry when overcooked (that is, cooked to well done). Despite the less than stellar dining experience, I’ll chalk this similarity up as a win for fake meat.

Priced the same as beef burger, 5 Napkin Burger seems to be going after carnivores as well as vegetarians. Both should be satisfied, so long as they remember to ask for their favorite cooking temperature.

Darrin DuFord is a travel writer, mapgazer, and jungle rodent connoisseur. His writing has won numerous awards and has appeared in The San Francisco Chronicle, BBC Travel, Gastronomica, Roads & Kingdoms, Narratively, and Perceptive Travel, among other publications. He is the author of Breakfast for Alligators: Quests, Showdowns and Revelations in the Americas (released in July 2016) and Is There a Hole in the Boat? Tales of Travel in Panama without a Car, silver medalist in the 2007 Lowell Thomas Travel Journalism Awards.
View all posts by OmnivorousTraveler →
This entry was posted in Fake Meat, New York City and tagged charring, Fake Meat, impossible burger, vegetarian. Bookmark the permalink.