Posted on April 6, 2020 by OmnivorousTraveler

Out of all the albums in my collection, I can count the number of live releases on two hands. I find that the feedback loop between crowd and band, creating a spontaneous, one-of-a-kind energy, often becomes lost in a recording. Extended middle sections, requiring a joint to sound engaging, compete with extended sequences of masturbatory applause between songs.

When Josh Tillman, a.k.a. Father John Misty, dropped the surprise live album Off-Key in Hamburg on March 23, I gave it a chance for several reasons. Recorded with Orchestra Neue Philharmonie Frankfurt, the release is a benefit for MusiCares’ COVID-19 Relief Fund, established to assist peers in the music community affected by the pandemic. Applause sequences were kept to a delightful minimum (mostly, at least). And hey, almost none of us will attend live concerts for a while, so Tillman and company may have to tie us over.

Of course, one could make a case that Father John Misty is a fitting donor for a soundtrack to a pandemic. “9 out of 10 of my songs are about the end of the world,” he mentioned during an interview with the Scandinavian talk show Skavlan a couple years ago (A rock-star-interview exaggeration? Perhaps, but not by much). Off-Key in Hamburg contains material from all four Father John Misty studio albums, which means the release’s lyrics form a stream of troubling observations and images: a boat capsizing, a satanic Christmas Eve, a comparison of burgeoning love to a carcass left out in the heat.

That also means that humanity is in the hot seat. Tillman performed several tracks from his Grammy-winning 2017 release Pure Comedy that serve up such reflections as “When you question their sacred texts / Written by woman-hating epileptics / Their languages just serve to confuse them” and “There’s no place for human existence like right here / On this bright blue marble orbited by trash.” But, all things considered, that’s “Not bad for a race of demented monkeys.”

Off-Key in Hamburg follows the studio recordings closely, yet some spin off a curious freshness. The philharmonic treatment of “Hollywood Forever Cemetery Sings” bestows the heavy-footed indie rock track with an anthem-like grandness that normalizes Tillman’s fearless fascination with death. Meanwhile, on the live versions of “Hangout at the gallows” and “Things it would have been helpful to know before the revolution,” the strings’ melancholy pleadings are less gentle and more prominent, more quivering, casting a spotlight on Tillman’s unsettling lyrics of the former (“I’m treading water as I bleed to death”) and the latter (“But what a perfect afternoon / Industry and commerce toppled to their knees”). Tillman’s borrowings from French singer/songwriter Serge Gainsbourg reveal themselves proudly on Off-Key in Hamburg, with snarly guitar and rising orchestral blooms that echo the seductive doom of Gainsbourg’s Melody Nelson.

Those seeking an escape from Tillman’s subtly amusing darkness may find relief in the eccentric and forgetful hotel guest in “Mr. Tillman,” a track from God’s Favorite Customer that sees its unhurried gait become buoyant and nod-worthy on stage in Hamburg. Don’t give up before you hear “I Love You, Honeybear,” whose atmosphere of drunken burlesque provides a catchy platform for demonstrating that, in the throes of apocalypse, love can still prevail. “My love, you’re the one I want to watch the ship go down with,” Tillman announces. “The future can’t be real … / Unless we’re naked, getting high on the mattress / While the global market crashes,” he continues, and finally, “Everything is doomed / And nothing will be spared / But I love you, honeybear.”

As with many live recordings, the loss of intimacy on the quieter songs’ tender underbellies is unfortunate. But whether Tillman’s songs are live or not, the end result is the same: we don’t even feel the music prodding us and guiding us along, like the hands of a veteran pickpocket. As we float through the murky depths of Tillman’s thoughts, we briefly forget stuff like running out of facemasks and avoiding human contact. Thus, we briefly trade our unnerving landscape for Tillman’s. I know which one I prefer.

Free Funk for All

Posted on December 30, 2019 by OmnivorousTraveler 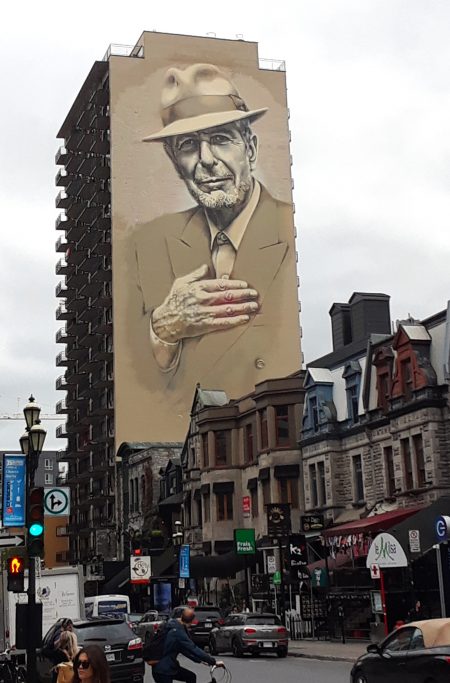 There is something satisfying about turning a corner in a grid of unremarkable buildings—offices, laundromats, Chinese takeouts, utilitarian staples—when a mural pounces out of the greyness. Proud of its hiding spot? I doubt it; a mural is not meant to shy away from eyes. It’s an indication that a city has decided it no longer needs to quarantine its art to funky neighborhoods. Free funk for all.

I considered such thoughts during my last visit to Montreal. Of course, one would expect vibrant murals adorning the buildings along Rue Sainte-Catherine, where college students put away bowls of inexpensive Vietnamese noodles and plates of Turkish lahmacun. But it seemed wherever I went in the city, murals were never off limits.

Just as a billboard paid for by the highest bidder was not chosen by the people of the neighborhood in which the billboard blares its advert, the art was most likely not chosen by local committee either. The murals may not be to everyone’s liking, but, in a way, the artwork evens the playing field of what is in view on a walk around the city. Here are some of my favorites from that August, 2019 visit. Note that over time, some of all of these murals will disappear and yield to new murals. A city inhaling, exhaling, living. Trying on new hats. Distilling recent thoughts and feelings. Or, just because it wants something new. 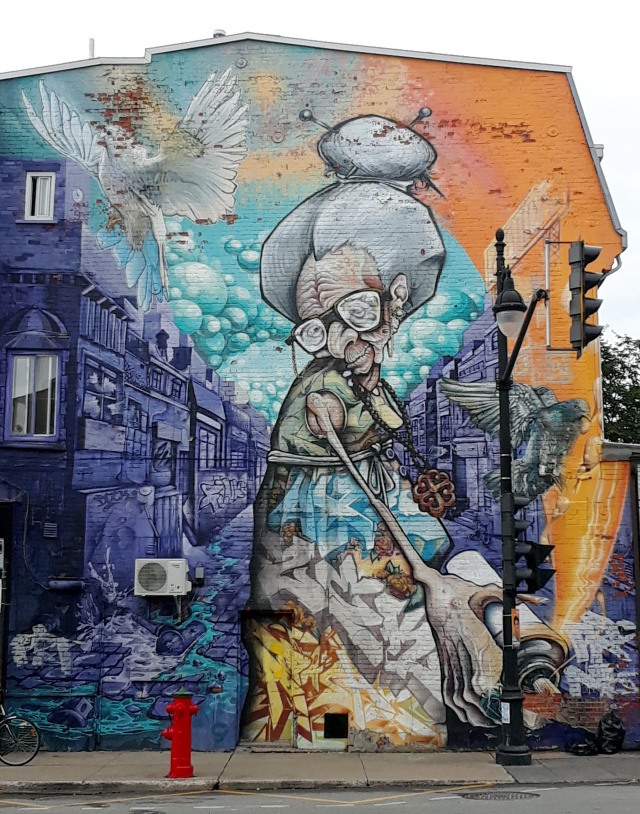 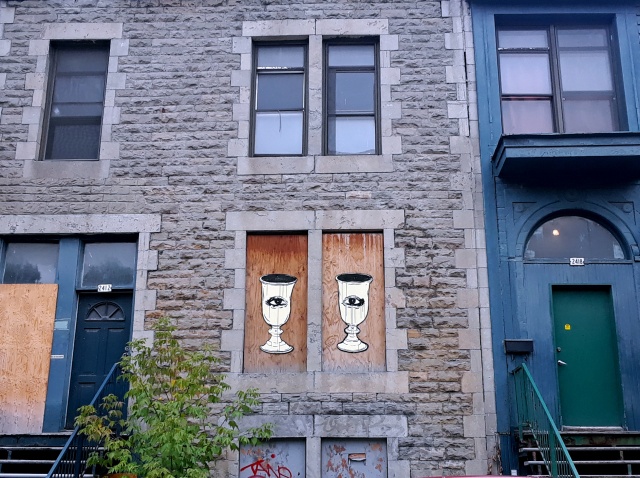 Fake Me Out, Please

Posted on April 29, 2019 by OmnivorousTraveler

Fake meat has come a long way. And the curiously bleeding fake beef from Impossible Foods has taken a lead in this revolution, graduating from placement at a few tester restaurants here and there to nationwide availability at Burger King, arriving later this year.

Over the weekend, I tried 5 Napkin Burger’s version of the Impossible Burger, with lettuce, tomato, pickles, swiss cheese, and their mustard aioli (a.k.a. “burger sauce”). The patty arrived surprisingly charred like beef, an upgrade from my last encounter with Impossible beef a few years back, where the charring more closely resembled that of the outer crust of falafel. Unfortunately, the burger was well done — I had forgotten to ask for it to be cooked to medium. Then again, having the option to request doneness for a fake beef burger indicates what fake meat has achieved.

But my mistake had uncovered another similarity between Impossible meat and real beef: they both lose their precious juice and become disappointingly dry when overcooked (that is, cooked to well done). Despite the less than stellar dining experience, I’ll chalk this similarity up as a win for fake meat.

Priced the same as beef burger, 5 Napkin Burger seems to be going after carnivores as well as vegetarians. Both should be satisfied, so long as they remember to ask for their favorite cooking temperature.

Posted on April 30, 2018 by OmnivorousTraveler

Does the extra fuzzy guitar on “American Guilt” usher in a new direction for UMO? Does singer Ruban Nielson put a potato sack over his head before he records his vocal tracks, or does he just make it sound that way during editing? Does asking too many questions like this count as clickbait? I attempt to answer these questions (except the last one) over at Cultured Vultures.

Posted on April 5, 2018 by OmnivorousTraveler

In the popular music of today, guitar solos seem to have become an endangered species. That’s because the instrument itself seems to have become an endangered species in this current landscape dominated by hip-hop, dance pop, and electronic-driven work. As expected, Jack White’s latest album, Boarding House Reach, contains plenty of White’s luscious guitar riffs and solos high in the mixes. But this time, they coexist in a rhythmic sea of hip-hop, spoken word, funk, and country. Did Jack White just save rock ‘n’ roll by adapting it, or did his experimentation go a genre too far?

I explore the matter in my first piece for Global Comment: Genre, Gender, and Class Tumble in Jack White’s Sonic Blender.