Posted on April 7, 2013 by OmnivorousTraveler 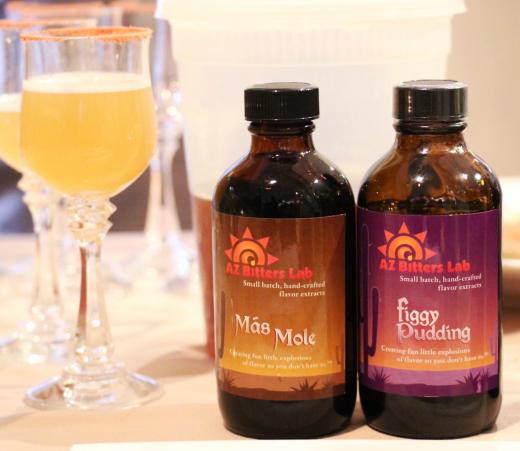 I’ve always said that I haven’t actually been somewhere unless I’ve at least had a drink there. Call it the drink rule. So when I walked across the Hoover Dam from Nevada to Arizona a few years ago, sniffed the 110-degree air, snapped pictures of the marvelous curves created by both nature and man, and turned around, Arizona didn’t really count as a place visited, at least in my book, because it did not satisfy the drink rule (airport bars don’t count).

Fast forward to last Wednesday. No, I did not return to Arizona. Scottsdale, Arizona came to New York City—at least some of its culinary creations, that is. The Scottsdale Convention & Visitors Bureau and the Brandman Agency organized a cocktail party for media at the test kitchen of Saveur Magazine in midtown. The event featured offerings that creatively use many Arizona-based ingredients, and the bureau even brought along one of the city’s mixologists, Chad Elsner of Bourbon Steak Restaurant in Scottsdale. “Arizona is not just a flyover state anymore for cocktails,” he announced to the room of journalists and writers while he took a break from serving up palominos (his curiously smooth concoction of aquavit, Arizona honey, Arizona bitters from AZ Bitters Lab, lemon juice, and a dusting of li hing powder on the rim). 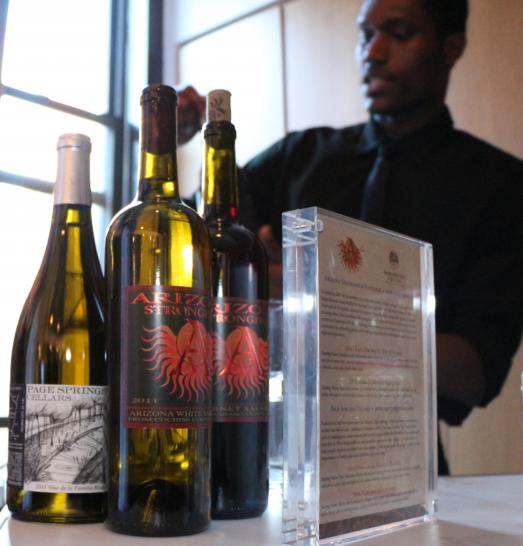 Local honey and bitters were not the only Arizona ingredients sloshing around in glasses. Arizona now claims over 60 wineries in various degrees of development, and bottles from several vintners were being poured at the bar, including offerings from Arizona Stronghold, a winery co-owned by Maynard Keenan from the metal band Tool. As I lifted up a glass of the winery’s 2011 Tazi—a white blend—I couldn’t help but recall Keenan yelling “Why can’t we not be sober?” in the chorus of the most well known track off the band’s 1993 album Undertow. But the offering in my hand was far from aggressive. It even went well with the evening’s samples of grilled cheese with lobster (obviously not a local species from landlocked Arizona, but I’ll forgive the state). The 2011 Tazi’s fragrant floral scent was accompanied by delightful citrus zest and melon notes, perhaps owing to its combination of such grapes as reisling, chenin blanc, and—surprise—malvasia (successfully breaking out of the boring ol’ chardonnay-only rut that too many American wineries voluntarily fall into). A few weeks ago, I was in Croatia and Slovenia, where malvasia is the hometown grape of the Istrian peninsula. Previously, I’d never heard of malvasia harvested in the States. Who knew it has been happily growing 5,000 feet above sea level in central Arizona for a least a decade? 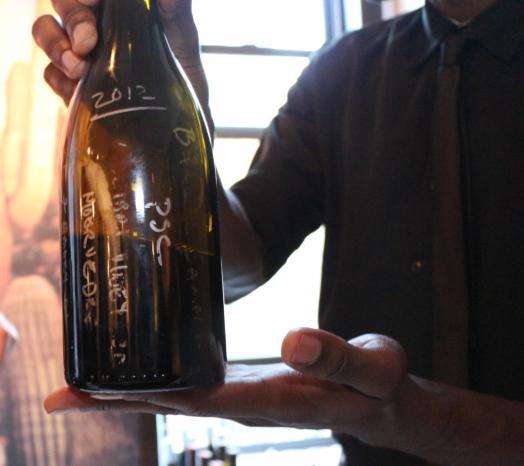 Many other practices of Arizona’s young wine industry are much less than a decade old. The magazine Arizona Vines & Wines only celebrated its fifth anniversary this month. Noticing my interest in his wine stock, the bartender reached down and lifted up a hand-inscribed bottle and said, “This wine is so new, it doesn’t even have a label yet.” I’d call that an effective hype-building technique. The wine turned out to be the latest offering from Page Springs Cellars, a mourvedre aged in Arizona-grown oak barrels, a daring departure from the industry-standard French oak barrels. Owner Eric Glomski indicated that the experimental wine is currently “brash and young” and will soften up when it is barrel-aged another year, at which time it will be officially bottled (with labels, of course), according to the information sheet provided to attendees. I found that the wine was indeed a little too rugged and toasty, but I’d be interested to see how Arizona wine ages in Arizona oak. I’ll just have to wait a year to find out.

So did my experience last Wednesday finally fulfill the drink rule? I don’t think so. But at least I know what I will order the next time I visit Arizona, hopefully sooner than later.

Darrin DuFord is a travel writer, mapgazer, and jungle rodent connoisseur. His writing has won numerous awards and has appeared in The San Francisco Chronicle, BBC Travel, Gastronomica, Roads & Kingdoms, Narratively, and Perceptive Travel, among other publications. He is the author of Breakfast for Alligators: Quests, Showdowns and Revelations in the Americas (released in July 2016) and Is There a Hole in the Boat? Tales of Travel in Panama without a Car, silver medalist in the 2007 Lowell Thomas Travel Journalism Awards.
View all posts by OmnivorousTraveler →
This entry was posted in Arizona and tagged malvasia, Maynard Keenan, mourvedre, Saveur, tourism, wine, winery. Bookmark the permalink.